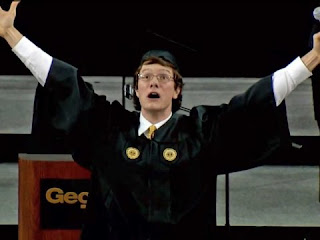 A Georgia Tech student’s epic convocation speech to incoming freshmen was taken from his high school debate coach, according to Gawker.

The Georgia Tech speech went viral this week, racking up more than a million views and making a celebrity out of sophomore Nick Selby.
As Gawker reports, Selby’s speech is a pretty close copy of a 2008 speech from Andy Stone — the debate coach at Selby’s high school. Gawker reporter Neetzan Zimmerman writes, “Did Selby straight-up rip off a speech given by his former debate coach, and pass it off as his own? It would seem so.”
For what it’s worth, Selby posted on Facebook about his former coach’s influence, writing, “I had an awesome speech coach in high school by the name of Andy Stone, and was absolutely thrilled when he agreed to let me use the end of his award-winning speech as the foundation for my own.” Screenshot Via Facebook
Selby’s admission went up 13 hours before Zimmerman’s article.
The full versions of Selby’s and Stone’s speeches are below. Although only the end of Selby’s speech made the news, the whole thing is filled with good advice for new students and is worth a watch.
The overlap between the two speeches starts at 5:00 in Selby’s video and 8:40 in Stone’s video.
Gawker is the high-brow gossip sheet covering media, entertainment, politics and technology.