My notion of high school debating turned out to be totally wrong, as I discovered when I visited Scarsdale High School. Their debate team, among the best in the nation, was preparing for last weekend’s Tournament of Champions at the University of Kentucky. With seven students qualified to compete, they had more qualifiers in Lincoln Douglas, one form of debate, than any other school in the country.

My concept of what debating entails comes from institutions such as the Cambridge Union Society, not that I’ve studied them that closely. My assumption was that a proposition—such as: peanut butter is good for you; it doesn’t just taste great—is tossed out for debate, sort of like a center jump in basketball, and the goal is to vanquish your opponent by getting off as many Oscar Wilde-like bon mots as possible.

I even thought I might pick up some pointers during my visit. I’ve always considered my lack of high school debate experience a gaping hole in my education, assuming I’d be much better at comebacks if I’d joined the debate team rather than going out for the tennis squad.

But Charlotte Blatt, the 17-year-old captain of Scarsdale’s debate team, quickly disabused me of that notion. “It makes my history papers better,” said the senior who is heading to Dartmouth next fall. “We know how to structure an argument. I don’t know if it makes me better at arguing with my friends.”

As we traveled the corridors of the affluent public high school, whose facilities seemed to rival those of many colleges, it soon became apparent why Scarsdale has become a debating powerhouse.

We visited a classroom where freshmen, under the guidance of senior mentors, were debating this topic: When in conflict, developing nations ought to prioritize environmental protection over resource development. And they were marshaling the work of particular philosophers to make their case. I can’t remember what I did as an after-school activity in ninth grade, but I’m fairly certain Immanuel Kant never came up.

“We teach the freshmen everything from international relations theory to John Rawls and Robert Nozick,” Ms. Blatt said, referring to a couple of prominent Harvard philosophers. 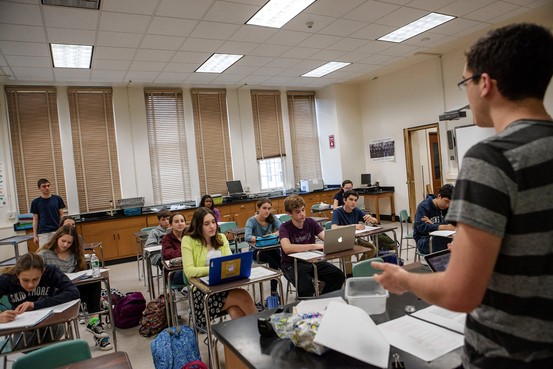 Student Noah Thaler, right, speaks to the group. Scarsdale has one of the top U.S. debate teams. Mark Abramson for the Wall Street Journal

She told me that she’d already attended 11 debate tournaments this academic year, including one of the nation’s largest and most prestigious: the Harvard National Invitational Forensics Tournament. “They are full weekend events. It becomes a balancing act between school and friends and debate,” she said.

I assumed that Lincoln Douglas, in which Ms. Blatt competes, got its name from the famous 1858 U.S. Senate debates, and involved debaters going toe-to-toe and being able to think on their feet.

It turns out to be even more of a challenge. Because Abraham Lincoln and Stephen Douglas knew what their positions were in advance. High school debaters must be able to argue either side of an issue.

The tournaments, as I understand them, function something like sports tournaments, with qualifying and elimination rounds, the victors going on to the quarters, semis and finals. And there are rewards beyond sharpened mental acuity and a nice bullet point on your college brag sheet; Ms. Blatt is convinced her debate experience boosted her prospects when interviewing at Dartmouth. “I spent four years of my life getting better at debate,” she explained. “It was really good to have something I could talk about with such passion.”

In addition, you can make new friends from all over the country. “Because you don’t have a partner,” Ms. Blatt said of Lincoln Douglas, “you’re forced to make friends with your opponents.”

We entered a classroom where Ben Ulene, a Princeton-bound senior who is perhaps Scarsdale’s best debater, was preparing for that weekend’s championships with Rahul Gosain, a talented junior. There were also sophomore spectators, there to learn the ropes of high-intensity debate.

“You can’t just be a good speaker and make good cases,” Mr. Ulene explained. “You have to be able to respond to your opponent in a fast way.”

He meant literally. The practice debate involved the same question the freshmen had been debating (whether developing countries should be obligated to fight global warming, or if the responsibility should rest with the first world that created most of the pollution). As Mr. Gosain launched into his four-minute “affirmative rebuttal,” he spoke so quickly—with the goal of squeezing in as many points as possible—that it was impossible, at least for someone new to the form, to understand a word he was saying. At first, I thought it was a joke—like that old FedEx commercial with the fast-talking John Moschitta.

“You can’t understand him,” Ms. Blatt whispered. “I can understand him. So can Ben and so can they,” she said, referring to the sophomores.

Joe Vaughan, the team’s coach, told me that one of the benefits of debate and the heavy schedule of tournaments is that it teaches independence; for one thing, students become talented travelers.

Unlike sports such as hockey or basketball, where parents have become fixtures on road trips, the Lincoln Douglas format, due to its incomprehensibility, doesn’t make for lively viewing except for the initiated. “It’s not easy for parents to get into the activity,” Ms. Blatt acknowledged.