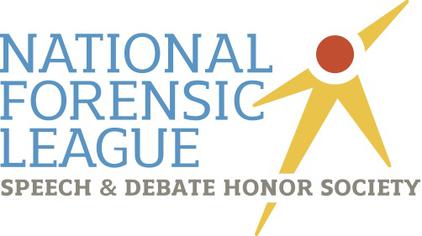 The biggest difference between most associations and leagues for debate and those for sports is that these associations and leagues do not provide all the administrative support for organizing the tournaments, they do not run the tournaments, and they are not staffed with full-time or part-time employees. Most of the officers of these organizations are volunteer coaches.

There are a number of national debate organizations.

National Speech and Debate Association (NSDA). This is the largest debate association in the United States, and I assume the world. The association has more than 3, 500 member schools and 100,000 active student members.

The NSDA provides educational support for coaches and students throughout the year through its website.  After enrolling in the NSDA’s honor society, students can earn points from participation in any debate tournament compete in and earn awards based on cumulative participation and success.

Through voting of its members, NSDA selects the monthly Public Forum topics and the bi-monthly Lincoln-Douglas topics.

The organization has more than 20 full-time staff.

National Catholic Forensic League (NCFL). NCFL is a volunteer organization that provide support for debate in two ways. First, it encourages the development of local leagues that support small debate tournaments throughout the United States. The Washington area Catholic Forensic League (WACFL) is a great example of this. Second, operates a large national tournament each year that has more than 2,000 competitors. The tournament always occurs over Memorial day weekend.

Membership in the league and participation in the tournament are open to all schools, public or private. All religions are also welcome.

Most states also have an organization that supports speech & debate in their respective state and hosts a state championship tournament.

Should you join the organizations?

I always encourage coaches to join speech & debate organizations because those organizations provide essential support and opportunities to many students.

That said, it is important that you join organizations that important to your own program.

First and foremost, I recommend joining any local league where membership is required to participate in the local tournaments. Participation in local tournaments is essential for all schools, so this is the most important organization to join.

Second, I recommend jointing the NSDA. They have valuable resources for coaches and students that come with membership and offer a spectacular national tournament.

One important thing for all parents to understand is that most debate organizations, including those listed here, only allow schools to register for membership.